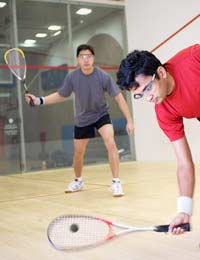 How many games are going to pass you by before you tackle the problem of handing your opponent easy points? It happens in all racket sports, whether it be a tennis, badminton or squash court that you happen to be doing battle on.

The good news, if it can described as such, is that the problem can afflict players of all abilities. Possessing the best equipment or the latest performance sports gear doesn’t cut any ice, either: you may have invested in the best racket money can buy, but in the wrong hands the result will be the same – frustration, anger, disappointment, disillusion.

So what are you going to do about it? Well, for starters pull your head out of your hands, and while you’re at it pull your socks up. Making unforced errors won’t be solved by teenage-style tantrums and moodiness on court or in the locker room.

Ask yourself why these mistakes are occurring. Analyse the match, analyse where you went wrong. And remember that there is a difference between an error that is the result of astute play by your opponent, and one that was simply down to you. It is important to remember that difference because sometimes you cannot legislate for great play by the opposition; that is all part of the cut and thrust of competition. Sloppiness, either in terms of technique or because you switched off at the crucial point, is something you definitely can do something about.

If technique is your problem, then devote practice sessions to working on your weaknesses. Don’t be disheartened because every player has them. Indeed the warm up is all about watching an opponent play forehands, backhands, cross-courts, in order to identify a potential chink in their armour. Improving your weaker shots will give you the confidence to develop a more rounded game, which means that every time an opponent asks a question of you, you are more likely to be able to provide the answer. Better technique, in turn, will breathe confidence into stroke play and ease away the physical tension in your playing arm that manifested itself previously.

A Question of Composure

Physical tension is the result of the mental stress that your opponent is putting you under. But what if you are your own worst enemy when it comes to getting your head right? If it is a question of composure, then you need to relax, forget the fear of failure and start enjoying the game. Too many players dread stepping out on court because they have forgotten why they started playing in the first place - enjoyment. Even the best club players need to remember that squash is only a game, and that aforementioned fear of failure almost inevitably leads to defeat.

On the other hand, a lack of concentration may be down to a player dwelling on previous errors or planning too far ahead. Remember to play in the here and now, on that particular point. Once that is won, begin planning for the next. As for the errors, they are in the past, and nothing is going to bring those lost points back. Always concentrate on what you can control, not on what is out of your hands.

Once you have pinpointed what lies behind your unforced errors, you are on the way to eliminating them. That does not mean you will end up developing the perfect game, but at least when a point is lost you will have the self-awareness to know why it happened and how best to ensure you don’t repeat it on court.