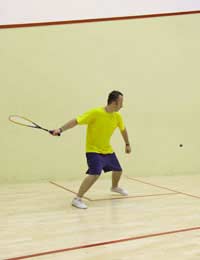 Making the back of the court with strong and commanding forehands and backhands is the basis of any successful player’s game. And that means applying good technique and body shape to ensure that you make the shot effectively on every occasion because you can be sure that any sign of weakness will be pounced upon by your opponent.

So let’s start with body shape for the forehand. What we want is a nice open stance, front shoulder further towards the side wall with the other shoulder almost facing the back wall. All the power is going to be generated from the backswing so initially most of the weight is going to be transferred onto the back foot before moving forward and onto the front foot as the racket head travels down and through the ball.

Aim to draw back the racket head high to maximise the amount of power that can be generated. The swing should be timed so that you are making contact with the ball as it begins to drop from the top of the bounce and is parallel with the front foot. Once contact has been made, the follow through should see the racket head rise upwards to almost meet the top of the front shoulder while your head should come out of the stroke in a nice upward position so you are ready to react to your opponent’s counter-strike.

So to the backhand. In common with other racket sports, this is the stroke that the majority of players new to the game struggle with, for the simple reason that the execution does not come as naturally to the body as the forehand. The first rule of any backhand stroke is: do not be afraid. The second rule: on no account tense up when executing it because the smooth and natural movement of the body will be absent and you will fluff it badly.

The good news is that if you get the backhand right, you are removing a possible route to victory for your opponent. Once they see that one or two shots played to your backhand are not resulting in the easy points they hoped for, they will be left with a big problem.

Ahead of the Front Foot

Again, the all important power should come from the backswing, so pull back that racket head nice and high, front shoulder further towards the side wall than the shoulder of the non-playing arm and as the racket descends begin transferring your weight from the back to the front foot and bend your front knee slightly so that you are leaning into the shot. Strike the ball slightly ahead of the front foot. The follow through of the racket should finish above head height.

Always make your movement in the backhand smooth and rhythmic to maximise the amount of power. Don’t be tempted to try to “force” the shot by asking too much of your front shoulder as this will compromise the shot and possible leave you with a nasty strain that could keep you out of action for a week or two.

It is likely that your success rate with the forehand will be a lot higher than the backhand initially, but ensure that this doesn’t result in you neglecting the latter. Otherwise you will have fallen into the classic trap of competing with a weak backhand, and your opponent will be laughing all the way back to the locker room.