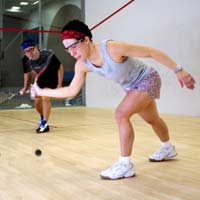 Shot selection is key to dominating a game and achieving the conclusion to a rally in your favour. Knowing both how and when to use individual weapons in your armoury will decide whether you will be triumphant or exit the court, shoulders slumped in defeat.

However, don’t be afraid to fail, because it will prevent you sharpening technique and learning from the mistakes that are common to every single player’s progress towards maximising their potential. In the case of the crosscourt drive, there will be times when you simply get it wrong, both from a technical and tactical point of view. Some players simply opt for it because they are overeager to close out a rally, or lose their nerve as the psychological pressure of on-court combat begins to fatigue them.

If your aim is to break your opponent’s dominance of the T, always ensure that your drive is wide with the aim of striking the opposite side wall, otherwise you will only succeed in allowing your rival a simple opportunity to pile on the pressure and force you into error. It is also for this reason why utilising the crosscourt drive for a kill shot is not recommended for less experienced players.

In terms of the technical aspect of the shot, preparation and execution should be geared towards cutting the racket face across the ball, whether you are playing a forehand or backhand. To achieve this, ensure that you are not gripping the racket too tightly and that your wrist is not cocked. In addition, pay attention to weight distribution – it should correspond with every stage of shot making in order to ensure that balance and control of the racket arm and, ultimately, the ball are assured.

Your follow through should be smooth, the forearm pointing towards the opposite side wall where you are aiming to place the ball.

Because the fundamentals of the crosscourt are based on those of the straightforward forehand and backhand drive, it is a good idea to ensure you are well versed in the technique for the latter before moving onto to its more difficult variation.

If you find yourself struggling to get to grips with the crosscourt, ask a fellow club member to observe your technique. They should be able to quickly identify the shortcomings that may not be so immediately obvious to you. The benefits of investing in some coaching sessions should not be overlooked, either. Yes, it will incur expense but it will get you where you want to be in terms of technical ability a lot quicker.

Talking of investment, don’t forget that time spent practising rather than playing can bring big dividends. Yes, building time for squash into a busy work and social schedule can be difficult, but try not to let your enthusiasm for on-court action be to the detriment of an hour or so running through a few drills and working on technique.

Ultimately, success in making this shot work for you is all about judgment. And that is something that only comes with experience. So master the technical aspect of the crosscourt drive, and in time you will begin to understand the right moment to unleash its potential on your opponent.