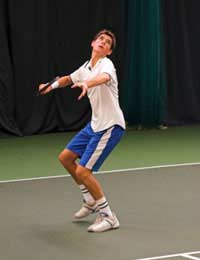 Devastating. That's the only word that describes the effect on your opponent when you correctly execute a drop or lob. They are two of the most effective weapons in your armoury. Devastating can also be used to describe the consequences of not playing either shot properly because you are likely to leave your opponent with ample opportunity for the kill.With either shot, success or failure is all in the preparation, both physical and mental, so that you give yourself ample time to execute it effectively.

Let's begin with the drop: you want to aim for a short, controlled swing on the racket, the face open so that it "cuts down" through the ball, thus creating the backspin that will allow it to impact high on the front wall and hug the wall as it descends. The follow-through should also be short in order to aid the soft caress of the ball against the strings.

In terms of footwork and body position, you want your weight on the front foot and a low body profile so that you are almost crouching under the ball. A word on wrist action, too: keep it firm because this will allow you maximum control over the destination of the ball. The same basic drill applies to both the forehand and backhand.

Executed correctly, the drop is highly effective at any time during the game, but it can be particularly useful against a tiring opponent because of the psychologically draining effect it can have. Try to use it sparingly so that your play doesn't become too predictable, thereby lessening the chance that the drop will have its intended effect.

The lob can get you out of many a dangerous position, the aim being to flight the ball over the head of the opponent, leaving them off balance and struggling to retrieve from the back corners of the court. This, in turn, will give you time to recover your own balance and composure. As such, many players view it as a defensive stroke. However, it can also deal a major blow when used as an attacking option.

Place your weight on the front foot and crouch low using a short backswing to give the ball extra lift to hit high on the front wall. Accentuate the stroke with a high follow-through with the racket. Again, ensure that your wrist is firm in order to make a clean and accurate contact with the ball, although if you find that your lobs are suffering from a lack of height, allowing a slight flick of the wrist may make the shot more effective.

Both drops and lobs require plenty of practice. And don't be dispirited if your early attempts only succeed in setting up your opponent. Getting your angles wrong or failing to execute the shot properly is inevitable from time to time, but you're only going to get better by attempting these strokes. Once you do have them under control, then your opponent is going to feel a lot less sure of themselves. And that's half the battle won.