Home > Squash > What is the Boast?

What is the Boast? 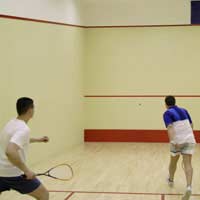 Got yourself in a bit of a tight spot in one of the back corners of the court? Then there’s only one thing for it: time to utilise the boast. For the squash novice this may sound like double Dutch, but essentially we are talking about a shot struck off one of the side walls or the back onto the front wall. It can be used as either an offensive stroke, as a means of forcing the opponent to the front of the court, or as a defensive tool, as in the above scenario, when the aim is recovery from deep in the court.

There are a variety of boasts that are available to the more advanced player. There is the trickle, for example, the skid and the reverse angle. But it’s best not to confuse the issue; rather let’s stick to the basics for starters.

You can play a boast from anywhere in the court and the shot itself should be played using the same technique as the drive, namely a firm wrist with an open racket face. Your feet should be a shoulders’ width apart. This technique should be followed for both forehand and backhand. Obviously the closer you are to the walls, the shorter your backswing is going to have to be, to avoid making contact with the racket head. The ultimate aim is to have the ball bounce close to the nick of the side wall.

Common problems that less experienced players find when executing the shot involve either hitting the Tin or finding the middle of the court. The former is the result of not getting enough height into the shot and can be rectified by bending the knees slightly when setting up to make the shot so that the racket head is making contact with the ball from below, thereby providing the right amount of upward momentum. If, on the other hand, the problem involves the middle of the court, then it’s a question of revisiting your on-court angles and perhaps thinking about introducing a little less power into the shot.

In common with all strokes in the game, the best way to get to grips with the boast is practice. Ideally use your squash partner to run through various in-game scenarios and see how effectively you choose when to play the shot and how well you execute it. Once you are comfortable with the basic dynamics, you can think about adding some of the variations, such as the skid, to your game.

Players who make the most of the boast are those who know their angles on court, and who use the shot only when necessary. This latter point cannot be stressed enough, because the more you resort to using it, the easier it becomes for your opponent to read your game. And once that happens, then you really are up against it. So keep the boast in your armoury, only unleashing it when your opponent least expects it in order to maximise its chances of success.