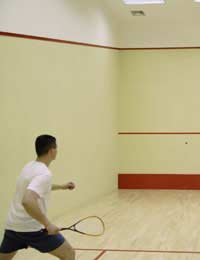 Why is it that so many of your services are returned with a dismissive volley by your opponent? Well from a technical point of view, the simple answer is that you are failing to make the sidewall with your initial stroke. But more fundamentally, you are just not taking the game by the scruff of the neck. The server holds the destiny of the next point in their hands. Get it right and the point will be theirs; get it wrong and they’ve wasted a value opportunity to assert themselves.

Putting your opponent on the defensive and seizing the T is all about good technique. Facing the sidewall with your back foot in the service box, throw the ball up and out of your body to provide ample room for an effective forward swing of the racket. You should be aiming to make the back corner, so while power is important, don’t be tempted to hit the ball too hard as this will result in you compromising on accuracy.

The same will be true if you allow too much movement of the wrist and upper body to influence the shot. So, after the initial step across with the front foot on execution of the service action, keep your body nice and steady. Your initial target area is high up and off-centre on the front wall so that the ball then hits the sidewall in order to avoid the dispiriting volleyed return mentioned above.

After the racket face and ball have made contact, ensure that you are quickly on the move towards the T, but don’t forget to observe the path of the ball so that you are fully prepared to anticipate the return of your opponent.

A more risky service strategy is to invite a high volley from your opponent using the lob shot which involves hitting high and centre on the front wall. To gain the height needed from the initial shot, bend your knees slightly during the service routine so that your racket is hitting the ball from below, and ease off on the amount of power by shortening your backswing. Be sure not to overcook it though, or you risk serving out.

The quality of service return naturally depends to a large extent on how well the server performed, but there are a couple of basic points to make. Firstly, you’ve got to try and avoid the ball dropping into the back corner as this is likely to bring the rally to a swift conclusion, and not in your favour. So if the opportunity to volley arises, seize it.

Secondly, always watch how the server sets himself or herself for the shot and continue this observation throughout the service action. How the server stands, and the action of their racket arm will provide clues as to their intentions.

Hold your racket nice and high so that you can quickly get into position to make a forehand or backhand reply. Footwork will play a vital role in getting into good shape for the shot, too, so be on your toes and ready to move.As your technique develops, you will discover more ways to vary your service and outfox your opponent. But always remember the basics as they provide the foundation of every shot you make.