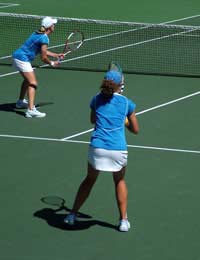 Some players are given their introduction to the game on the singles court; others as part of a social or family group forming a four-hander that provides a welcome diversion during work or school holidays. However this is unlikely to determine whether later on in an individual’s development, they choose to command the court on their own or prosper as one half of a partnership.

What is likely to decide whether singles or doubles is your principal discipline is the mental side of the game. Some players are so single-minded, if you excuse the pun, that they just cannot accept giving up any influence on how a match is decided. They have to play every shot; they have to take every decision. The result may not be in their favour, but at least they knew their destiny was in their own hands. Even the thought of having another player on their own side of the net fills them with dread. And if that player was to make a simple error? Well, it would test their powers of self-control to the limit. If this person sounds very much like yourself, then doubles play is very definitely not for you.

This is not to say that those who enjoy playing as a pair, and are successful at it, are the essence of self-control and generosity. There will, indeed, be times when a partner finds the net or sets up an easy kill for the opponents – and this may well leave the other half of the partnership seething inside. However, they will be better able to accept this, in part because they are aware of their own fallibility on occasions.

In short, great doubles partnerships are like marriages. Neither is a saint, but they gain strength from the fact that two definitely can be better than one. This understanding provides a good basis for developing understanding on court in terms of positional play and the role that each individual takes.

Some partnerships have well defined offensive and defensive roles, although within this framework both have to be competent at either role because in match situations, individual points take on a life of their own, and a player has to be ready to deal with whatever challenge an opponent’s shot to their half of the court presents.

Good self-knowledge means each player in a partnership will develop a very good idea of the other’s strengths and weaknesses. Firstly, this will heavily influence the assigning of offensive and defensive roles described above. It will also mean that if one player is being attacked in an area of technical weakness – for example, on the backhand - the other can prepare themselves for the opponents being able to exploit this.

The same is true for service. A weaker server means the partner is going to have to assume a defensive rather than offensive stance at the net; even stand back on the baseline in order to prepare for what is likely to be a strong return from the other side of the court.

Developing a good dialogue both during and between matches, as well as helping each other out in terms of technique and tactics, will allow a doubles partnership to develop into a successful team. This closeness will make victory all the sweeter, and more than make up for the occasional frustrations.