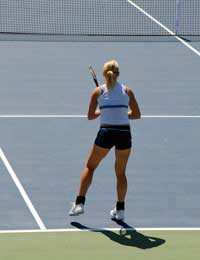 Mastering the art of the lob is not simply about achieving a measure of technical ability. You’ve got to know the right time to play it. Use it sparingly too. Otherwise your opponent will begin to find it all too easy to read your intentions, to the extent that when your head is coming up during the follow-through it will be met with the sight of your opponent already stepping back into position to hit a point-winning smash return into your side of the court.

The offensive lob is a devastating weapon against an opponent who tries to move in and dominate the net. They’ll be cutting down the space and angles for a flat return off either the forehand or backhand, so your aim is to whip the ball up and over their head using topspin so that it lands deep in their court and runs away from them after bouncing. Think about how you would hit a straightforward topspin forehand, then step off the pedal in terms of power and angle the racket upwards to achieve greater elevation.

If you execute the stroke well your opponent will read the action of your arm as a straightforward forehand, therefore leaving them flat-footed and unable to react when they find the ball flying high over their head but inside the line. A demoralising sight, to say the least. As well as being an effective point winner, the shot will mean your opponent will think twice before attacking the net again, leaving you with the time and space to bring your own attacking strategy into play.

The defensive lob can be equally effective. Let’s face it, you wouldn’t be attempting it unless you were in a tight spot, but just because your situation calls for drastic action, try to remain as calm as possible when executing it.

Deep in the Opposing Court

Unlike the offensive version of the shot, chop down on the ball with the racket face to impart a great degree of backspin and hit high. The height will prevent your opponent having an opportunity to hit a smash while the backspin will provide the depth and time you so desperately need to regain your position and composure. In order to achieve the maximum amount of depth in the shot, put a fair degree of power into it – don’t worry about overcooking it as the backspin will impede the forward motion of the ball through the air and stop it sailing over the baseline.

The key to achieving a measure of success with either the offensive or defensive version of the shot is practice. Complete drills with a playing partner that will give you a greater “feel” about how much topspin or backspin to apply in order to achieve the best results, and play shots from different areas of the court to cover as many in-game scenarios as possible. Don’t be afraid to use the lob during match play, either. After all, what’s the point on sharpening your technique if you’re not going to use it to maximum effect when the heat is on.