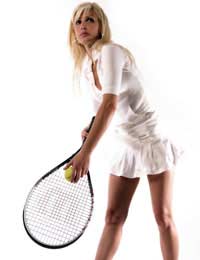 You’ll know when your racket grip is working because you’ll be hitting the ball harder and with greater accuracy. But the real test is whether you are even conscious that you are holding the racket: in short it has become an extension of your arm.

In common with golf, a great deal of debate revolves around this issue, and why one technique is superior to another. But remember that idea of the racket feeling as one with your arm - it’s all about what feels comfortable. Everything else flows from there. Don’t forget either that what may work for one individual may not necessarily be right for you.

Palm Behind the Handle

Let’s get started with the forehand. The most common is what is termed the Eastern grip, which basically involves addressing the racket as if you were taking someone’s hand, the fingers wrapped around the handle with the thumb resting on top of the second finger. This position means that the palm will be directly behind the handle and, therefore, forming a solid base from which the racket head can swing up and out of the body.

The Semi-western is not such a natural grip but it has the advantage of applying more top-spin because of the way that the hand position influences how the racket head addresses the ball. Unlike the Eastern, the palm is further around the handle, about 45 degrees.

Position the palm a further 45 degrees around the handle and you will have the Western grip, which is designed to impart even more top-spin. By contrast, more backspin, or slice, can be achieved by positioning the palm further around the top of the handle. (In other words, the opposite direction from changing from an Eastern to a Semi-western or Western.) This grip is referred to as a Continental grip.

For the back-hand, the fingers should be positioned further around the handle, so that the back of the hand and wrist lie directly in line with the path of the racket head as it swings outwards from the body, providing a solid bond between racket and arm. It sounds complicated but in reality it is a grip that you adopt naturally.

For a right-hander, simply hold the racket in your left hand and take hold of it with your right (the opposite for a left-hander) and you’ll see how your hand addresses the grip in order to leave the racket face slightly forward of 90 degrees.

If you are planning to adopt a two-handed backhand, then it’s simply a case of placing the weaker hand further up the handle in order to provide extra strength and stability when the racket head strikes the strings. It is this extra stability that makes the two-handed approach so popular but it does require the development of good racket control so that the temptation to apply too much power via both shoulders doesn’t result in shots losing their accuracy.

Don’t be afraid to experiment with your grip as you may be surprised by the improvements that adopting an unfamiliar one will bring. But the bottom line is, don’t use one that you don’t feel comfortable with. Otherwise that seamless relationship between arm and racket will break down.