Home > Tennis > Introduction to the Court and Different Surfaces

Introduction to the Court and Different Surfaces 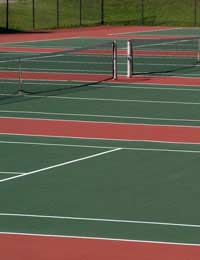 The worldwide appeal of tennis means that even those who don’t play the game possess at least the most rudimentary idea of the playing surface. However when you first step out on court yourself, it is always a good idea to know the dimensions of this strange new domain.

The court is 78 feet (23.77 metres) in length and 36 feet in width. On either side run tramlines that are 4.5 feet in width. In singles play, the area of the tramlines is deemed out of bounds i.e. a ball landing there is out. As a result, a total of nine feet is removed from the width of the court, providing less surface area to be covered by one player. In turn, two players on either side of the net in doubles-play means the full width is utilised.

Parallel to the baseline and 21 feet from the net on both sides is the service line, which is split into two to form service boxes. As the name suggests, these boxes form the target area that must be struck by a player on service. The net itself should overlap both sidelines of the court so that it can be used for both singles and doubles. The net should stand 3 feet in height at the centre strap, 3.5 feet at both end posts.

For those players who are often too quick to call balls out that bounce on the line, it should be remembered that the lines constitute part of the surface where a ball can be called “good”, so even if it only clips the side of the line, it is still deemed to be “in”.

Casual tennis watchers in the UK will be most familiar with the court surfaces at the All England Club at Wimbledon, the lushness of the grass courts due in no small measure to the heavy rainfall that descends, it seems, with irritating regularity when the championships are held in southwest London during the two-week period that overlaps June and July.

Grass is one of the faster surfaces, and players unfamiliar with its performance characteristics can find that games simply pass them by. Slower surfaces include macadam, concrete, carpet and clay.

Not surprisingly an entire industry has grown to meet the demands for hardwearing synthetic surfaces that can be adapted to produce arenas for a whole range of sports, including tennis. The International Tennis Federation has responded to the great variety of new surfaces that have appeared by adopting a system of court speed classifications based on three levels: slow, medium/medium fast, and fast. A comprehensive list can be found at the federation’s website.

The complexities of modern court technology should not concern the enthusiastic amateur to any great degree. However, the issue of court surface should always be taken into account when playing due to the influence the surface will have on both the bounce and the speed of the ball, and what tactics should be adopted.

Although many players restrict themselves to a single surface simply because it is the one that they have developed their game on at their local municipal facility or club, it is always worth getting experience on more than one, not least because it will present new challenges that can only have a beneficial effect on their development.