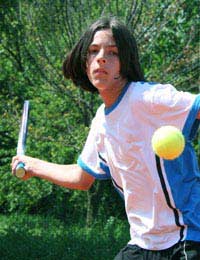 Whether you are making an aggressive bid to win the point or fending off your opponent's attack, it is the forehand and backhand that are going to constitute the basic weapons in your armoury, so getting to grips with them as soon as possible is going to minimise the amount of frustration you feel during the early months of play and practise.

Watching the world's leading players is always a useful coaching tool but never be tempted to try to emulate their more audacious fore and backhands. Rather stick to learning how to get the basics of anticipation, footwork, body shape and arm movement right. In short, before you try hitting the lines, make sure you can get the ball over the net.

As the ball comes towards you, the most fundamental aspect of the forehand is getting your body ready to execute the shot. You should be on your toes rather than flat footed because movement upwards through the legs, to hips and ultimately the shoulders is all initiated by what's going on down on the ground.

Flight of the Ball

The further away your body is from flight of the ball, the more those feet and legs are going to have to work to get into position, but once they are, the rest of the body movement must flow from them. As the ball bounces, begin to turn both your hips and shoulders in order to bring the racket head back on an upward arch and level with the shoulder blade. Timed properly, this upward movement will translate into the racket head travelling on its downward path as the ball rises off the court surface towards it.

Racket head and ball ideally should meet around the hip area, the forward turn of your shoulders and hips together with the leg muscles generating power off the strings of the racket. Good technique will see you hitting "through" the ball and your body following through smoothly rather than pulling up short.

As your body comes out of the shot, the head should naturally come back to the upright position so you can react to your opponent's next move. Remember to keep on your toes, and on no account be tempted to psychologically sit back and admire the shot you've just executed.

The same basic technique is involved in the backhand: sound footwork allied to hip and shoulder co-ordination. Many novices have a fear of the backhand simply because executing the shot does not come as naturally as the forehand. This means that mastering the fundamentals as quickly as possible will give you an advantage over many players of the same standard. This success, in turn, will mean you are more confident in your backhand, use it more often and, therefore, improve your technique. If a lack of confidence in the strength of your wrist is the problem, the added assurance of a two-handed technique can be adopted.

Hit "Through" the Ball

Either way, begin by bringing your body in line to make the shot, your weight on your racket shoulder and corresponding foot with the racket head rising up to shoulder blade height, before descending as the ball rises up from the bounce towards it, impact occurring at waist height. As your racket and body hit "through" the ball, ensure the rotation of shoulders and hips out of the backhand are smooth and co-ordinated and the head rises back to the upright position. It is the co-ordinated movement that will result in good racket contact and maximum power. Be careful not to use your wrist to try and punch extra pace into the ball: not only does this represent poor technique but it can result in injury.

Try and pace the development of both fore- and backhand so that you are equally confident in playing the ball on either side, thereby giving you a more balanced approach on the court.