Home > Getting Started > Racketball Versus Racquetball 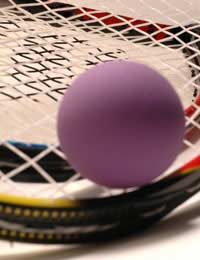 Two nations separated by a common language often trips off the tongue of media commentators when discussing the relationship between Britain and the United States. And you could be forgiven for thinking that is solely what separates racketball from its cousin across the Atlantic (racquetball).

However while the basic design of the squash court is shared by the two codes there are indeed differences that mark them out as separate sporting disciplines. For one thing, the American sport utilities a court that is longer and narrower – 40 feet long; 20 feet wide compared to the corresponding dimensions 32ft; 21ft. The latter are the imperial measurements of a standard squash court.The surfaces that can be utilised by players during rallies also differ slightly. The American version allows for the ceiling to come into play, and there is no board or tin on the front wall.

So when did this sporting divide occur? In the mid 1970s, to be exact, when the game was introduced into the UK. It had originated a quarter of a century earlier on the eastern seaboard of the United States using a ball reminiscent of a tennis ball, larger and bouncier than a squash ball, and short handled rackets, sorry, racquets, that were relatively easy to use because they produced an action that was pretty close to striking the ball with the palm of the hand.

Its introduction into Britain was made easier by the decision to base the game on the dimensions of existing squash courts, and balls were designed to be both slower and less lively in terms of bounce to take account of the reduced number of surfaces in play.

Both codes have singles and doubles events, but racquetball has the additional and intriguing three-handed contest known as cutthroat. This involves a single player competing against a doubles team for the duration of service. Once service is lost, another player takes over and competes against the other two.

For those in search of an even bigger challenge, Two on One involves a single player competing against a doubles team for the duration of the match. While the single player gets one opportunity on service, the doubles partners get one each, so it is a case of having to complete twice the amount of work in all aspects of the game. Definitely a game that should be reserved for those with great technical ability and fitness to match.

Players based in the UK will find that the common court dimensions mean that many squash clubs also offer racketball sessions. Indeed, England Squash, the sport’s national governing body, absorbed the British Racketball Association during the course of the late 1990s. Its website has contact information for coaching courses as well as a list of the rules of the game. Across the Atlantic, the US Racquetball Association carries links for both state and national events as well as information on development programmes.

It’s clear that although this is a case of a sport divided by a common language, as well as some variations in specifications, it is united by the attractions of speed, excitement, and a good physical workout that draw in competitors on both sides of the world.