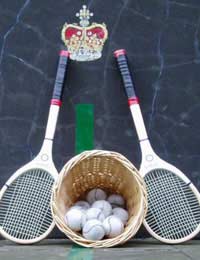 Ah the thrill of the chase. That is essentially what makes Real Tennis such a fascinating sport for those who have encountered it. To those for whom it remains a mystery, it will be a relief to know that, not surprisingly, it does share some similarity with the sport that has appropriated its name. So, yes, you’ll find a net, and a court; rackets and a ball, too. The scores run 15, 30, 40 and deuce as well, and points can be lost when balls are hit into the net or out of court. But it is the line markings where the average tennis fan begins to get confused. And this is where the chase comes in.

The unfamiliar aspects of the Real Tennis court reflect the origins of the game in the tightly packed medieval streets of Britain and Europe. For example, there is lean-to with a sloping roof that runs around three sides of the court, known as the penthouse. On the service side, this lean-to has openings, or galleries, which echo the open windows of the medieval houses.

The court is divided into two distinct sides: the service side and the hazard side. The former, as the name suggests, is the only end from which players serve. To be deemed “good”, a service must bounce on the hazard side of the penthouse roof before landing in the court in the area bordered by the service line and the fault line.

Both sides feature “chase lines” marked out at half-yard intervals, which enable the marker, or umpire, to mark the chase. A chase is called when the ball bounces twice and is measured at the point where the second bounce occurred. Service then switches to the opposing player (or players in doubles) and the object of the exercise is to make the second bounce of the ball occur nearer the back wall than where the chase was marked, thus winning the point. Points can also be scored by hitting the ball through one of the galleries.

Real tennis rackets are wooden framed and asymmetrical in shape, mirroring the shape of the human hand, which served as the original racket. Balls consist of a cork core and Melton cloth covering. They are heavier than the standard tennis ball and exhibit less responsiveness in terms of bounce.

So what do you do if you want to try the sport for yourself, or see professionals in action? The International Real Tennis Professionals Association is based in London and can supply contact details for clubs in the UK, USA, Australia and France.

Despite the initial dislocation that some players feel when they first walk on court, Real Tennis is a fascinating sport that will test those more accustomed to the modern-day version. It also requires skills that will appeal to squash players. And at the very least it provides a fascinating insight into the origins of a game that has evolved into a global phenomenon.