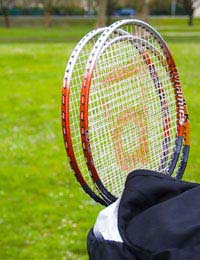 Good technique is all about the relationship between your hand and the racket. Hold it too tightly or loosely and you won’t be able to exercise any control over the weight or direction of the returning shuttle. In common with all racket games the ultimate aim is to mimic the sensation of playing a shot using the palm of your hand, thereby providing the amount of “feel” required to make your shots as comfortable and effective as possible.

The basic grip involves holding the racket head in your non-playing hand and gripping the shaft with the other so that the palm is resting against the edge of the handle that is flat with the face, the thumb resting on the bevel that is 45 degrees to the top edge of the handle. For the backhand, the thumb should move around so that it is resting on the bevel directly behind the racket, resulting in a chopping action that will result in a powerful and confident stroke.

As well as the position of the hand around the grip, think, too, about how far up it is positioned. So, for example, a commanding shot such as the smash will benefit from the hand positioned towards the bottom of the racket, allowing the power generated by the backswing to be translated into the racket head. By contrast, more subtle shots requiring more “feel” will benefit from a more intimate relationship between hand and racket face; therefore, the fingers will be positioned further up the shaft.

The process of making minor alterations to grip during the cut and thrust of match play may sound both confusing and daunting but it is a process that will come naturally as you gain experience on court. In the end, it should be instinctive, thereby leaving your mind plenty of opportunity to concentrate on getting your body shape and footwork right to make the play.

The type of shot you want to make will determine what action you use to make contact between the racket face and the shuttle. A whipping action, for example, utilises the lower arm and a loose wrist in order to produce a lightening quick stroke of the racket that generates a great amount of power into the shot. By contrast, cocking the wrist so that it can heavily influence the racket head is used for a tap over the net; similarly an equally subtle push shot involving a short backswing with little or no follow-through also involves the use of a firm wrist.

Developing your racket technique and, therefore, a wide range of shots is down to practice, to the point when particular shots in certain situations almost become instinctive. Once you have the basics in place, then the important job of translating that knowledge into a match situation comes into play. Because it is when the pressure is on that you most need a calm mind and a racket arm and wrist that won’t freeze. Just concentrate, stay loose and the rewards will come.