Badminton: How to Serve 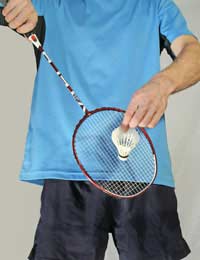 Whether playing singles or doubles, when it comes to serving, the onus is upon you to force the issue. That opening play will go a long way to determining the destiny of the point, so use it to your advantage and get both technique and choice of shot right.

Let’s start with the high forehand, and a delivery in a singles match. There is lots of court to play with here, so what you are looking for is to drive your opponent as far back into the court as possible without the shuttle landing outside the service box.Essentially, this is a defensive shot but it can pay big dividends because the service return will have to be made from a deep position, giving you more time to plan a potential killer blow.

Your backswing can be a full one to generate power, working in tandem with the rest of your body to get depth into the shot. That means the weight initially on the back foot transferring forward to the front foot as the racket face moves forward to make contact with the shuttle. After impact with the shuttle, bring the racket head up and out in line with the trajectory of the shuttle so that it is in a good position for a quick reaction to your opponent’s reply.

The downside of a full backswing is that it will give the opponent plenty of warning about your intentions. So to add disguise and, therefore, surprise to this deep forehand, use a short backswing in conjunction with a strong flick of the wrist to generate the power off the racket head that you require. This will bring the same depth to the serve. In either case, contact between shuttle and racket face should occur slightly forward and to the side of the body.

The low trajectory serve is an attacking option that is tailor made for a doubles match. Your aim is to skim the shuttle millimetres over the top of the net but with enough power to make the service box. This means your opponent will have to dig the ball out, up and high, hopefully giving you an easy smash back into the opposite court. If he or she does get more depth on the return, at least you have the reassurance of your partner mopping up behind you, and hopefully delivering a winner.

Rather than the full swing or strong flicked wrist of the deep forehand, this is a push shot, so there will be minimal backswing, racket face and shuttle making contact from a relatively high position as the shuttle is dropped into the path of the racket face and played from in front of the body.

In addition, the body should have no influence on the power of the shot, the forward movement coming exclusively from the push of racket face on the shuttle. So keep both your feet and upper body steady. The low serve can be delivered from either the forehand or the backhand.

Once you are proficient in both high- and low-service deliveries, ensure that you utilise them. Don’t become too predictable; rather mix them up in order to keep your opponent or opponents guessing and, therefore, creating uncertainty in their mind.Don’t be wasteful with your service, either. Too many faults are only going to give the initiative to your opponent and leave you chasing the game.