Home > Improving > Nutrition On and Off Court

Nutrition On and Off Court 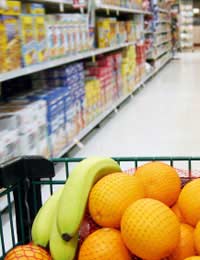 Performing to the peak of your capabilities is not just about mental toughness; you've also got to prepare your body properly for the challenge on court. A crucial part of good preparation involves what you eat and when.

Most importantly, don't be tempted to deny your body essential nutrition by believing part of getting fitter involves simply losing weight. The extra pounds around your waist or hips must be allowed to disappear naturally through a sensible training regime set out over weeks and months.

Those returning to regular exercise are giving their body a bit of a shock by suddenly asking it to perform physical tasks it has not faced for a number of years. It certainly isn't going to help your cause if you up the ante further by cutting down on food. What should be happening in tandem with the exercise regime is a re-write of your cookbook, removing foods of poor nutritional value and replacing them with those low in saturated fat and high in fibre.

One item that has to be removed from the menu straight away is fast food, including takeaways and microwave meals. Expecting your body to produce results in terms of athleticism on meals that may be high in saturated fat, sugar and salt is a recipe for disaster. You've gone half the way by getting yourself moving again, so why waste the effort by continuing to give your body low-grade fuel?

Work schedules may make food preparation difficult, but use the free time on days off to cook up batches of healthy meals incorporating good carbohydrates, or energy food, such as potatoes, pulses, pasta and rice. These can be frozen and individual servings left out to defrost so that when you return from work, a nutritious meal is waiting to be popped in the oven. As quick and convenient as the ready meal, but a lot better for you.

Meat eaters should cut down the amount of red meat in their diet and replace it with chicken and turkey, which are naturally lower in fat. Similarly, aim to drink more water, replace puddings with fresh fruit, and cut right back on alcohol. Nobody is saying you have to live like a monk, but if you have a game the following day, relaxing a little too much with some wine or beer is going to be reflected in how you perform.

Make sure you follow the three meals a day routine, satisfying any cravings for nibbles with a piece or two of fruit. On training days, aim to have a nutritious snack around an hour before you begin exercising.

Having ensured that your body is running on the right fuel before the match, make sure it is topped up between points on the court, too. Bananas are a more common sight on Wimbledon's Centre Court than strawberries and cream these days, the top players using the fruit as a conveniently packaged and efficient source of energy.

Intensive five setters in tennis and battles of will on the squash or badminton court can often be decided in favour of the player who topped up their energy levels rather than let their body run out of stream at the climax of a match. Keep your liquid level topped up, too. But take small sips rather that big gulps - you don't want to walk back on court with a belly full of water that is going to cause discomfort rather than rehydrate.

Healthy eating coupled with regular exercise will result in a fitter, stronger you, and the pounds will fall off naturally. This regime will give you the basis from which to develop your game. Remember that all the technique in the world will count for nothing if your body isn't sharp enough to get down to the ball in the first place.

The Importance of Stretching Exercises

Benefits of Joining a Club